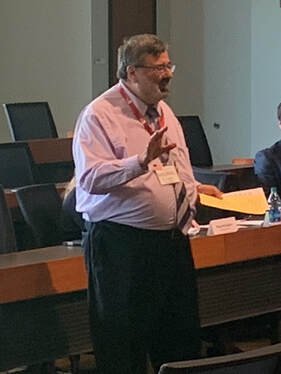 LAW OFFICES OF
MICHAEL W. PINSOF, P.C.
191 WAUKEGAN ROAD ​SUITE #305
NORTHFIELD, IL 60093
OFFICE PHONE (847) 446-1000
​CELL PHONE (847) 338-7004
E-FAX: (847) 586-9160
E-MAIL: mpinsof@sbcglobal.net
University e-mail: mpinsof@roosevelt.edu
Office Hours: M-F 8:30 AM-6:00 PM (Saturday by appointment only)
Mike received his B.A. in Political Science from the University of Iowa in 1976, and his Juris Doctor from DePaul University College of Law in 1979.  He has been licensed to practice law in the State of Illinois since 1979.  He is licensed to practice in the U.S. District Court for the Northern District of Illinois, where he is a certified member of the Federal Trial Bar; and in the Seventh Circuit Court of Appeals.  Mike has argued cases in the Illinois Supreme Court, and the Seventh Federal Circuit Court of Appeals.   In addition to his law practice, Mike is an adjunct  professor of Paralegal Studies at Roosevelt University, a published author in peer-reviewed law journals, and a frequent invited speaker at academic conferences.   His recent works have appeared in the Stetson University Journal of Advocacy and the Law, Quinnipiac Health Law Journal, The Law Teacher, the Consumer Finance Law Quarterly Report, and Perspectives.  Mike recently presented an updated and revised version of his newest work-in-progress entitled "I Can't Get No Satisfaction: Singing Out the Need for Uniform Statutory Reform in the U.S.", at the International Association of Consumer Law Conference at Indiana  University College of Law.  He presented  a working draft of that piece at the Central States Law Schools Association 2018 Annual Scholarship Conference at Texas A&M University College of Law.   At the 2017 Central States Law School Association Annual Scholarship Conference at Southern Illinois University College of Law, Mike presented "Remedies for the Insured's Breach of a Cooperation Clause: Sheath the Insurer's Shield to Survive on its Sword?", and presented a working draft of that  piece at the  2017 Developing Ideas Conference hosted by the University of Kentucky College of Law.  Mike has presented original works of scholarship at the 2014 International Conference on Contracts at St. Thomas University College of Law,  the Second Annual 2015 Legal Writing Scholars' Workshop at Washburn University College of Law, the Central States Law School Association 2015 Annual Scholarship Conference at the University of Toledo College of Law, the 2015 Legal Writing Institute One-Day Workshop at Washington University-St. Louis College of Law; and the Central States Law School Association 2016 Annual Scholarship Conference at the University of North Dakota College of Law.   Mike is a certified arbitration panelist in the Circuit Courts of both Lake and Cook County, Illinois, and is a member of the Illinois Bar Association, the Illinois Real Estate Lawyers Association, and the Conference on Consumer Finance Law.   His community service includes serving as an assistant  coach of a local high school mock trial team, and volunteering as a mediator of small claims and eviction cases.  Mike and Robin, his wife of 42 years, have four amazing children, and five beautiful grandchildren, Reya,  Jordan, Devin, Benjamin, and Levi.
AREAS OF PRACTICE INCLUDE:﻿
Commercial, employment, business, and contract litigation, including appellate practice;
Real Estate litigation (Evictions and condominium disputes);
Real Estate, commercial and business transactions;
Leases/Landlord-Tenant Law (Both landlord and tenant representation);